My Experience on SQL Cruise

My Experience on SQL Cruise

One of the great aspects of the SQL Server community is the willingness of people to share what they know as they discuss resolutions to problems they face.  There are a variety of opportunities to engage these people–blogs, user groups, SQL Saturday, the Summit, and there may be a few I am not aware of; however, I can say that none of them are quite like a SQL Cruise.  I’m glad I found it–SQL Cruise is the real deal. I did not, at first, consider SQL Cruise to be right work/play model.  I had not been a cruise before and I wasn’t sure what to expect.  My track record shows I tend to do things on the cheap and cruising screamed expensive–at least to my ears.  The price of the training itself was another concern as I would be paying for the training out of my own pocket.  While Tim Ford (blog|twitter) is a recognized name in the community, I hadn’t met him nor had I met the other speakers.  A self-proclaimed people person, I needed a connection and that connection came in the way of Wayne Sheffield (blog|twitter), who attended the Alaska 2012 cruise.  I met Wayne at the Richmond SQL Server users group and had attended several of his SQL Saturday and user group sessions.  Wayne gave it his seal of approval and after my wife and I agreed the numbers would work out, we booked our ticket on the SQL Cruise.

As a first time cruiser, I was pleasantly surprised by the whole experience and would go again.  If I was not part of a conference, a seven day cruise might be a little long; however, there is plenty to choose from to occupy yourself on board.  As a frequent foreign traveler, I enjoyed chatting with the staff about where they were from, what locations we had been to in common, and where they enjoyed going on the Islands.  Everyone was extremely friendly and when I found out they worked 10 hours a day, 7 days a week for 9 months I was super impressed.

Being in the Caribbean was very nice and I had not traveled to that part of the world before.  I was surprised how many Spanish speakers there were on the islands and many had lived and worked on the different islands their whole lives.  Again, one to do things on the cheap, I had purchased a Lonely Planet book beforehand and we went to several local places to get a better feel for life on the island.  On St Thomas of the Virgin Islands, we boarded a local bus and I struck up a conversation with a high school student.  I asked him what he call US citizens from the ‘mainland’–his response: “tourists”.  🙂

Favorite Island treat: French pastries on French side of St Maarten
Favorite Island Activity: Snorkeling on St Johns.
Favorite Island memory: Traveling back to the Cruise Ship with Big Joe, his son and Jason Brimhall (blog|twitter), his wife and my wife.  We had taken local transportation and no one, even me, was sure we were headed the right direction until we could actually see the cruise ship.  We shared the bus with several high schools students.

Chris Bell (blog|Twitter) is detailing his adventures on his site for a better day by day feel. 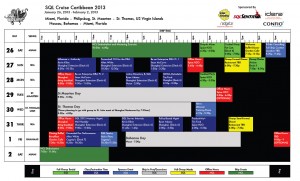 You do, after all, sign up for SQL Cruise because of the training and the technical presentations, given in two hour blocks were very good; however, they are what you would expect at any SQL Saturday. I did learn something new in each session and I have a notebook with pages of writing to prove it.  The real value came in less structured settings called office hours.  In those sessions, I would could ask ‘my’ questions to either a single person or the group I happened to be with at the time and get different viewpoints.  We all know there are a million different ways to do the same thing and I personally valued getting different opinions.  In preparation for the cruise, I made a list of some of the areas I was struggling with or needed help with and asked them.  Some were discussed in front of the whole group and I was a little nervous about being labeled a ‘stupid question asker’, but then I realized I was with the SQL community and EVERYONE was willing to help.

Getting my learn on!

Not all of the training is technical in nature.  Most, if not all, of the attendees have been DBAs for 5+ years and like me, have good technical skills.  Many are looking to expand the nature of their work and it was fascinating to discuss the paths they traveled.  For instance, talking with Tim about his experience of going from developer to DBA to then organizing SQL Cruise and talking with Neil Hambly (blog|twitter) about how he got his job with Confio showed me there are multiple ways to find fulfilling work in our field.

There are lots of little things I took away from the experience.  I have areas I need to improve in, some I knew before the cruise, and I have the following plan based my experience on the cruise.  In no particular order

As an aside note, I went on the cruise with my wife and she had a great time as well.  If you can swing it, I recommend bringing the spouse along.  Beside the technical sessions, everyone has the opportunity to get together and we enjoyed getting together with the other family members.  My wife now has a few more Facebook friends she might also meet on the SQL trail.  It was a great time and I am glad I had the opportunity to go.  I would recommend it to anyone.

Tim posted some great photos on his site.  Check them out!